"Art may advance the sovereignty of society." Ottmar Hörl

Ottmar Hörl, former president and professor of the Nuremberg Academy of Fine Arts, is one of the most versatile and innovative German conceptual artists and sculptors. In particular, original, radical works and large-scale projects featuring serial sculptures in urban spaces based on his concept of art as a communication model and organisational principle have earned him international renown. Hörl's oeuvre ranges between the poles of art, society and nature. Acting as a catalyst, Hörl "is an artist, stage director and explorer in the world of images. At the same time, his focus is always on debate in the history and development of art. The fact that Ottmar Hörl often uses humour and ends up with irony and the absurd when devising the rules and instructions of his game, has a liberating effect, opening the viewers' eyes and clearing their minds, and enabling them to take a fresh, a different look, conceiving of metamorphoses as new questions."[1] The selection of works shown at the CJK gives visitors an insight into Hörl's oeuvre, inviting them to reflect on what they see.

Are we in a position to really understand art created in the past? How do we perceive these works today? In his Picture Interferences series (since 2009), Hörl continues to focus on issues centring on the perception of art, iconography and iconology. When looking at Hörl's pictures of "icons of art history" – for instance, the Lucca Madonna and the Madonna of Chancellor Rolin by Jan van Eyck, or the Sleeping Venus by Giorgione –, all of which were scanned from art catalogues, we realise that Hörl has changed them using the slightest of intervention, and "bringing them back" in original-size fine art prints: "We mostly look at art through the medium of printed catalogues because we just can't visit all the museums in the world. So our perception of art is inevitably based on our reception of it through images in catalogues. We are not concerned with questioning art that was created five hundred years ago, but with reinterpreting the idea of the catalogue as a means of looking at art. My artistic contemplation of a picture in a catalogue is an annotation to the effect that things change and that pictorial languages, the iconography of art works, change,"[2] says Hörl. This turns Hörl's subversive Picture Interferences into an invitation for visitors to explore the works, thus sharpening their senses, as it were – also with a view to the upcoming Jan van Eyck exhibition.

The series of paintings under the title of Natural Wonders (since 2017) are unique works painted in acrylic on canvas in different shades of green. Dynamically moving lines that have no beginning and no end are seizing the complete picture plane in an all-over style. They reveal Hörl's sculptural approach and sense of space and depth. A multitude of associations is opened up, ranging from Albrecht Dürer's revolutionary "Large Piece of Turf", which Hörl first explored in an installation set up in 2003, to the concept of nature in the 21st century, to the intricacy of global networks in the digital age.

The serial sculptures entitled Modern Sculpture (since 2008), cast in plastic in traffic colours, revisit formal principles of 20th-century art, and make reference to formal structures characteristic of Hans Arp or Russian Constructivism. Thus Hörl makes his point in a manner never seen before. The basis of the Sculptures in the Gordian Style are empty tubes available in any DIY shop. The artist discovered the sculptural qualities and talents of the tube, its flexibility, and by choosing the title accordingly, connected his sculptures with the ancient myth of the Gordian knot. "The problem of untying this knot named after Gordios, the mythical founder of the Phrygian empire and father of Midas, who was famous for his wealth, was, according to tradition, associated with the rule over Asia. In 334 B.C., the state in Asia Minor and its capital Gordium fell to Alexander the Great, who is said to have cut the knot with a stroke of his sword. Ottmar Hörl turns the industrial material into the visual carrier of a myth. He plainly shows its flexibility and convertibility: the object remains what it is, keeps its identity, and yet gains mythical pictorial appearance and significance, becoming a symbol of a problem as such, which even antiquity's brilliant military leader was only able to solve by using brute force – because the Gordian knot not only represented a riddle however to be solved, but also a mystery. This sculpture, too, is more than a three-dimensional object, it is a metaphor for an order created according to certain rules and indissoluble disorder, as it can only be returned to its original state as a ready-made by brute force. (…) The ready-made as a found, industrially manufactured product, and the sculpture as a three-dimensional organisational principle are indissolubly connected in Ottmar Hörl's body of work." 1

As the organisers specially requested, visitors will be able to encounter the legendary Sponti gnomes in the CJK's outside area. That the garden gnome as Hörl's success story was set to conquer the world, was not foreseeable when it all began. As early as in the 1970s and 1980s, Ottmar Hörl used industrially produced materials and first set up an installation of garden gnomes at Galerie ak in Frankfurt am Main. "The garden gnome is the one figure most discredited in Germany. Does it have the potential to double as material for art? This was the question I was interested in," says Ottmar Hörl. In 1994, Ottmar Hörl launched a new series called Rolling Change, featuring 1,000 blue Sponti gnomes made of plastic material and erected in Seligenstadt's public space. Hörl's Sponti gnome harks back to the so-called Sponti scene that had developed during the 1970s and 1980s in Frankfurt am Main, a movement of non-conformist leftist activists counting Joschka Fischer among them. A number of similar sculptural projects were to follow up to the present (with the political installation called "Everyone against Everyone" at Kunsthalle Schweinfurt in 2019 being the last to date). Manfred Schneckenburger, a former curator of documenta, characterised Ottmar Hörl, with a view to his sculptural projects, as an "offensive and direct strategist campaigning for a new type of public art"[3]. His radical consistency to derive everything from place, time and current social and cultural issues is what gives Hörl's pieces that kind of communicative efficacy that transcends museum spaces and keeps countless people fascinated. "To me, public space is the ideal platform to present art and make it accessible to lots of people. In doing so, I see myself as a catalyst for creative processes. Creativity and creative power are the basis for further developing all the fields of living and working, and, ultimately, for further developing our society," explains Hörl.

Incidentally, Ottmar Hörl was first invited to present his work in solo exhibitions in Belgium at the Provinciaal Museum in Hasselt (renamed Z33) in 1982 as well as at Galerie Transit in Leuven in 1991. For the Lineart international art fair held in Ghent in 2008, he developed "Dance with the Devil", a sculptural project featuring an army of 700 serial "Poisoned" gnomes raising their right arms to perform the Hitler salute – an installation created to "satirise the concept of the master race propagated by the Nazis", revealing the mechanisms and machinations of hierarchical regimes, and attracting worldwide media attention and discourse.

Profile: Ottmar Hörl was born in Nauheim, Germany, in 1950. He lives and works in Frankfurt am Main and Wertheim. In 1985, he founded an interdisciplinary group known as Formalhaut, with architects Gabriela Seifert and Götz Stöckmann. Up to 2018, he was a professor at the Academy of Fine Arts in Nuremberg, acting as the institution's president until 2017. He is the recipient of several awards, such as the art multiple Award, Wilhelm Loth Award, intermedium Award, and the CREO Innovation Award. Hörl's works have been exhibited internationally and are held by major museums and public collections, including the Albertina in Vienna, Austria, the Daegu Art Museum in South Korea, and the San Francisco Museum of Modern Art in the United States.

Moreover, Hörl's "Lunch Break" installation, a collaboration with KHBT for the London Festival of Architecture, is currently on display by St Paul’s underground station (running until March 2020). 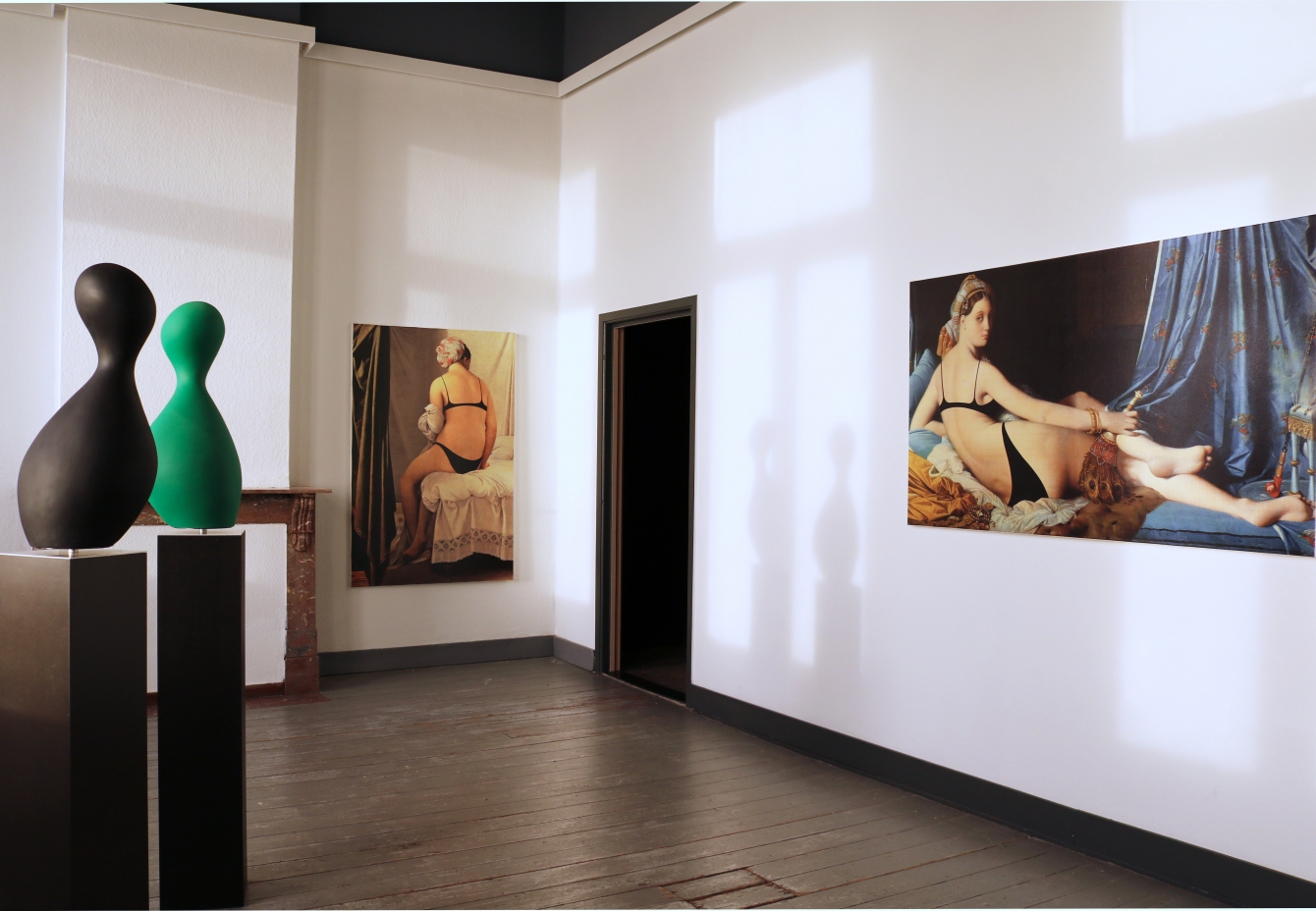 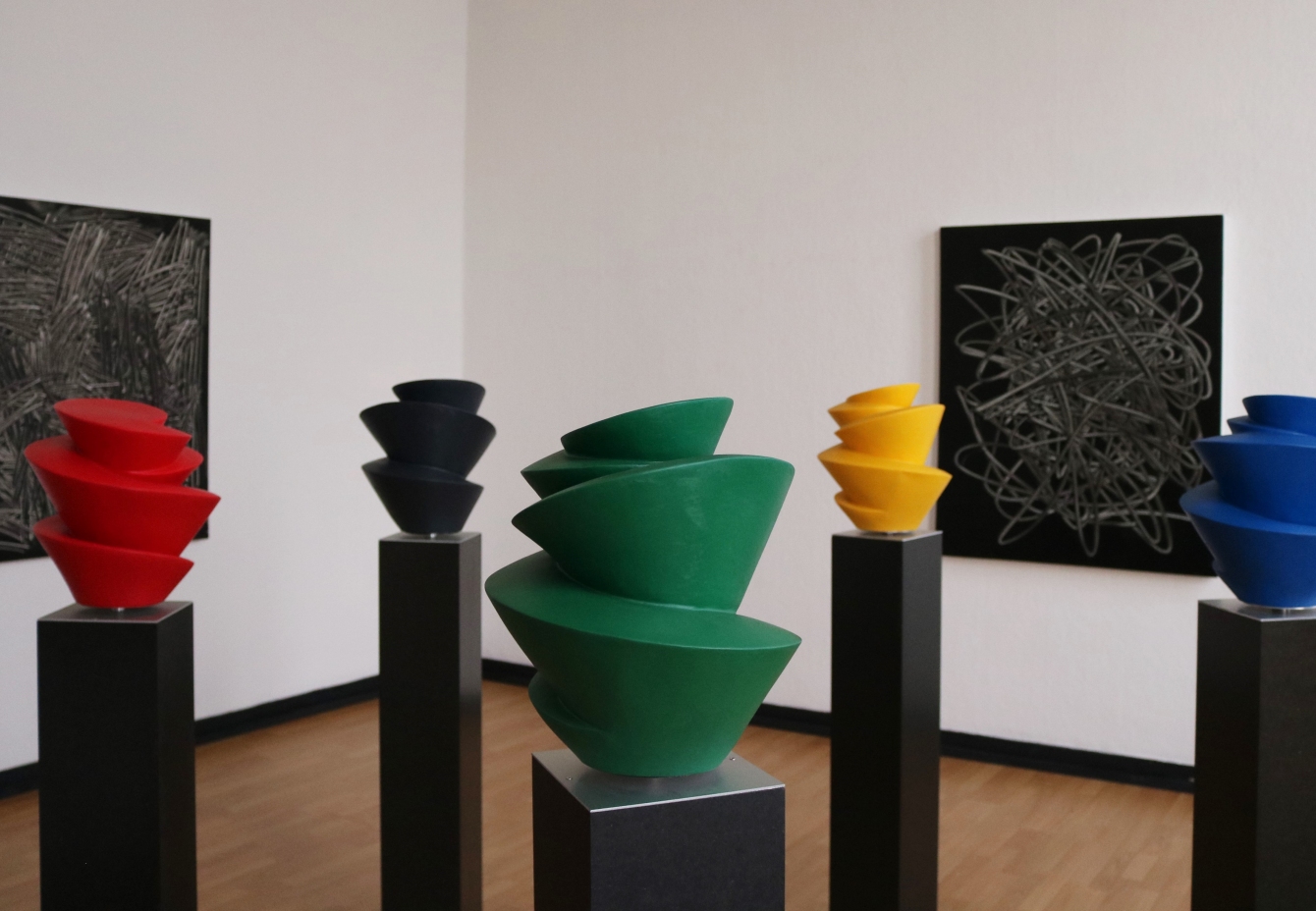 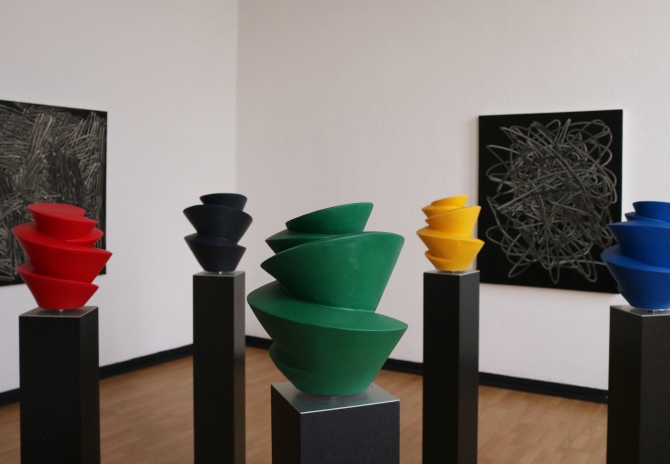 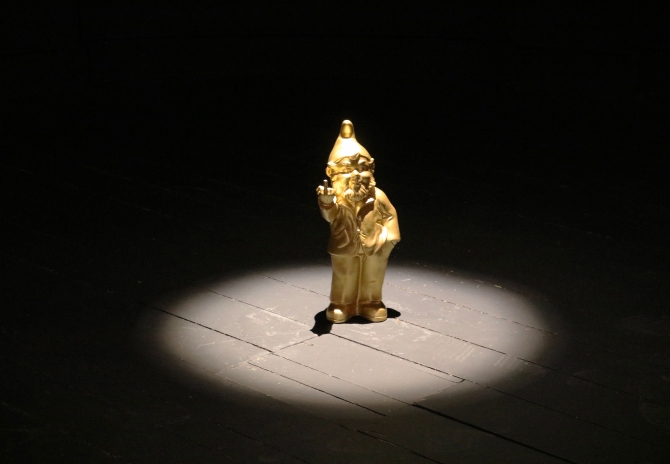 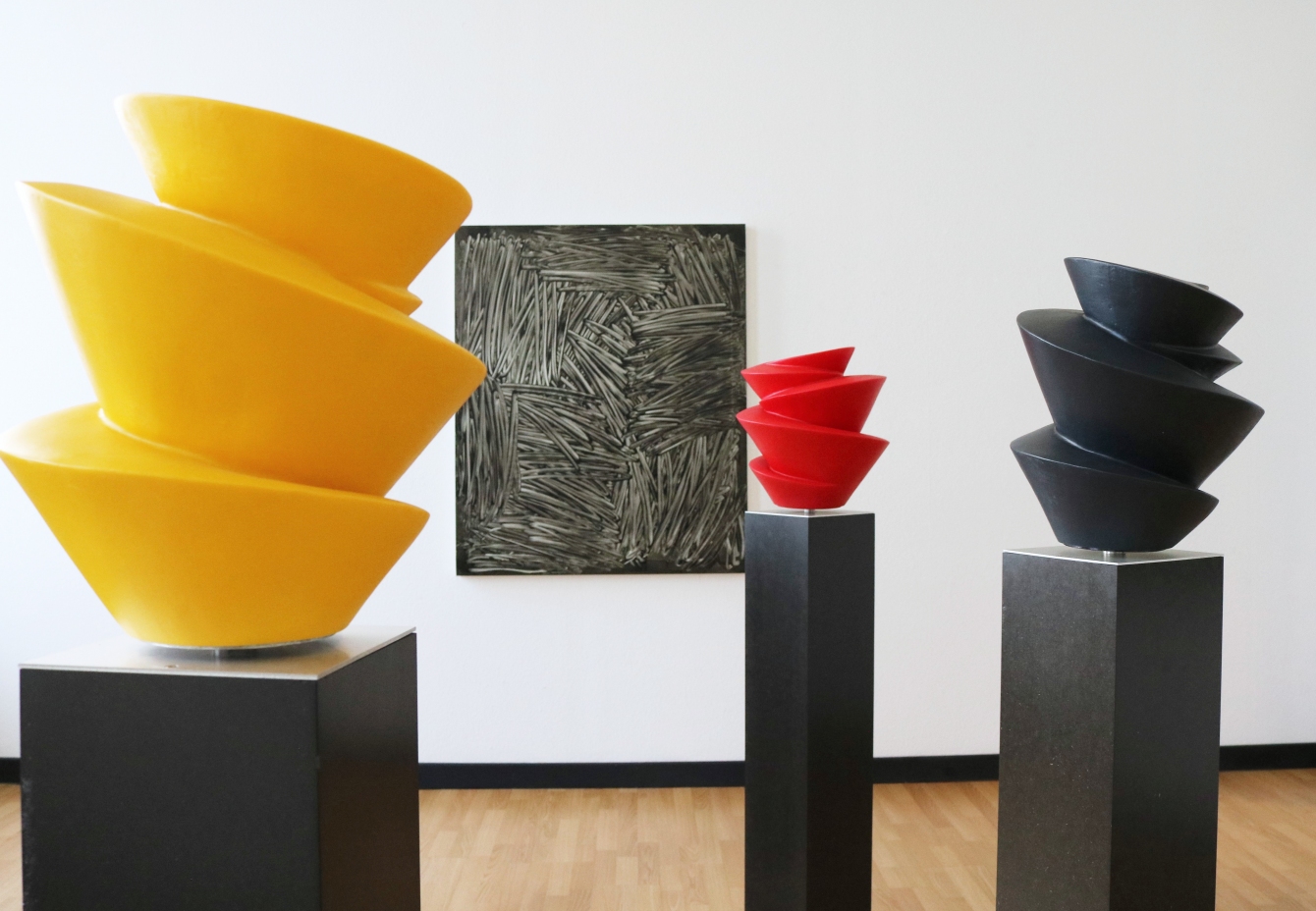