In 2009, 1,000 suricates took an outing into the region of the Hohenkarpfen estate in the Swabian Jura. Far from their native habitat in southern Africa, they symbolised globalisation and the increasing accessibility of every corner of the earth.

The Hohenkarpfen estate will be the destination of a very special "Works Outing". On Sunday, 13 September, at 11 o'clock, Ottmar Hörl, the internationally renowned sculptor and performance artist, will be opening an open air exhibition there. By that time, he will have set up 1,000 roughly life-size suricates on the meadows surrounding the hotel and art foundation. Why suricates, then? The cute little fellows inspire positive feelings in anyone who may observe them. Maybe this is because, in some respects, their behaviour resembles that of human beings. They're whizzing about without getting tired, disappearing into their underground caves, suddenly showing up again in a different place, digging, playing, sunbathing, employing babysitters, or teaching their young ones how to hunt. One member of the clan is always on the lookout, standing sentry and keeping an eye on the surroundings. It is just this characteristic posture of standing sentry that Ottmar Hörl has chosen for his suricates, thus adding a new quality to the great many art events he has staged in public so far. Cheerful and somewhat bizarre at the same time, the suricates, normally living in the arid savannahs and deserts of southern Africa, give sunny yellow colouring to the early-autumn landscape around the Hohenkarpfen mountain. Hörl's plastic sculptures might also allude to the fact that the world has become a global village. After all, the neighbouring town of Trossingen is twinned with Windhoek, he capital of Namibia. Art makes such associations possible. This time, a stately deputation of suricates is taking a "Works Outing" rather than official representatives. 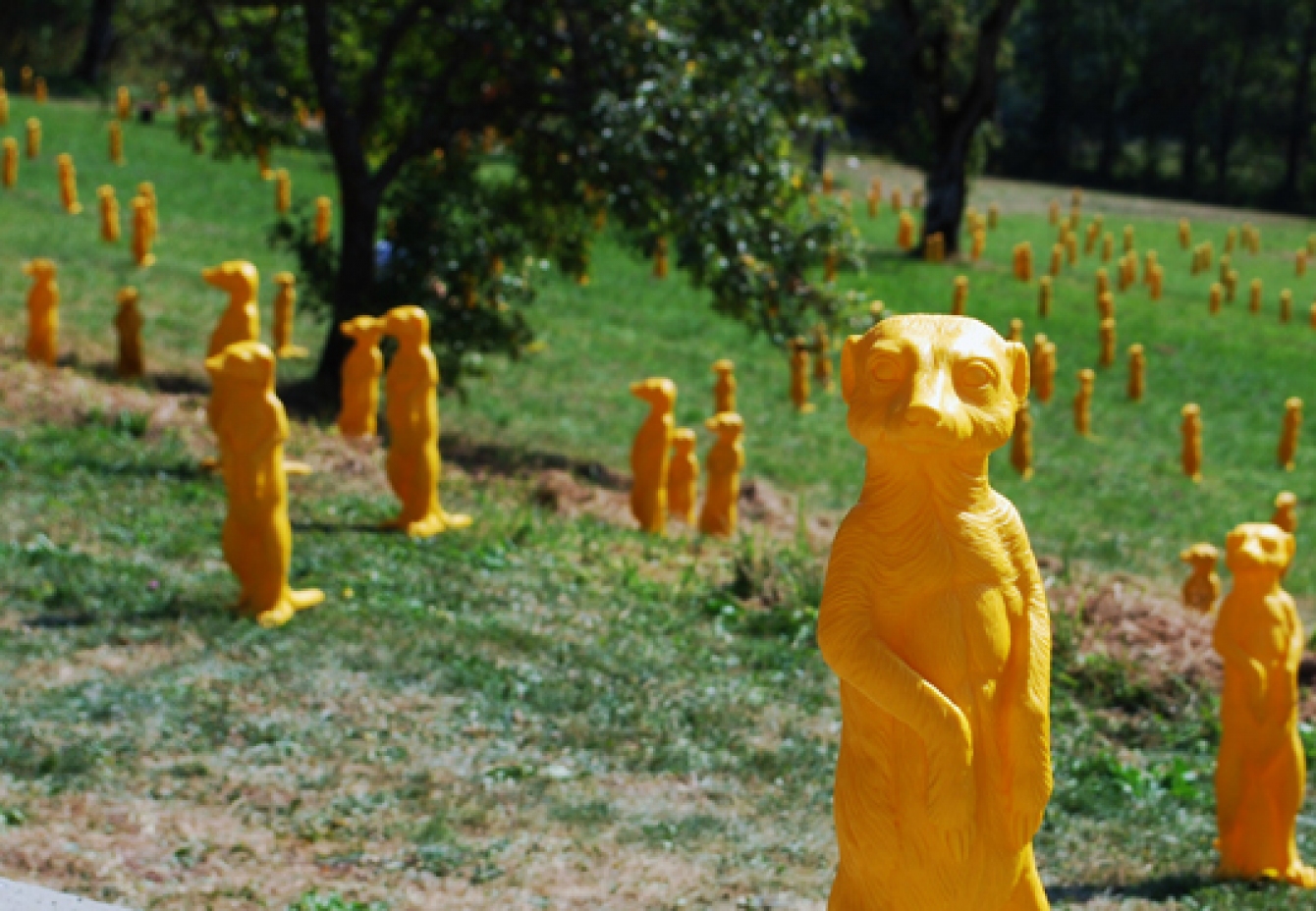 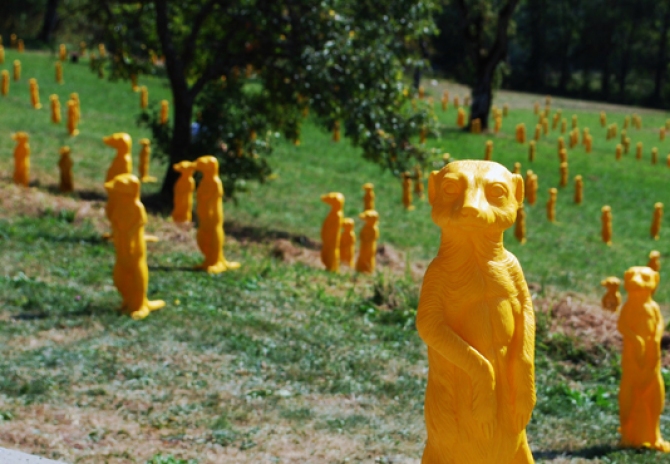 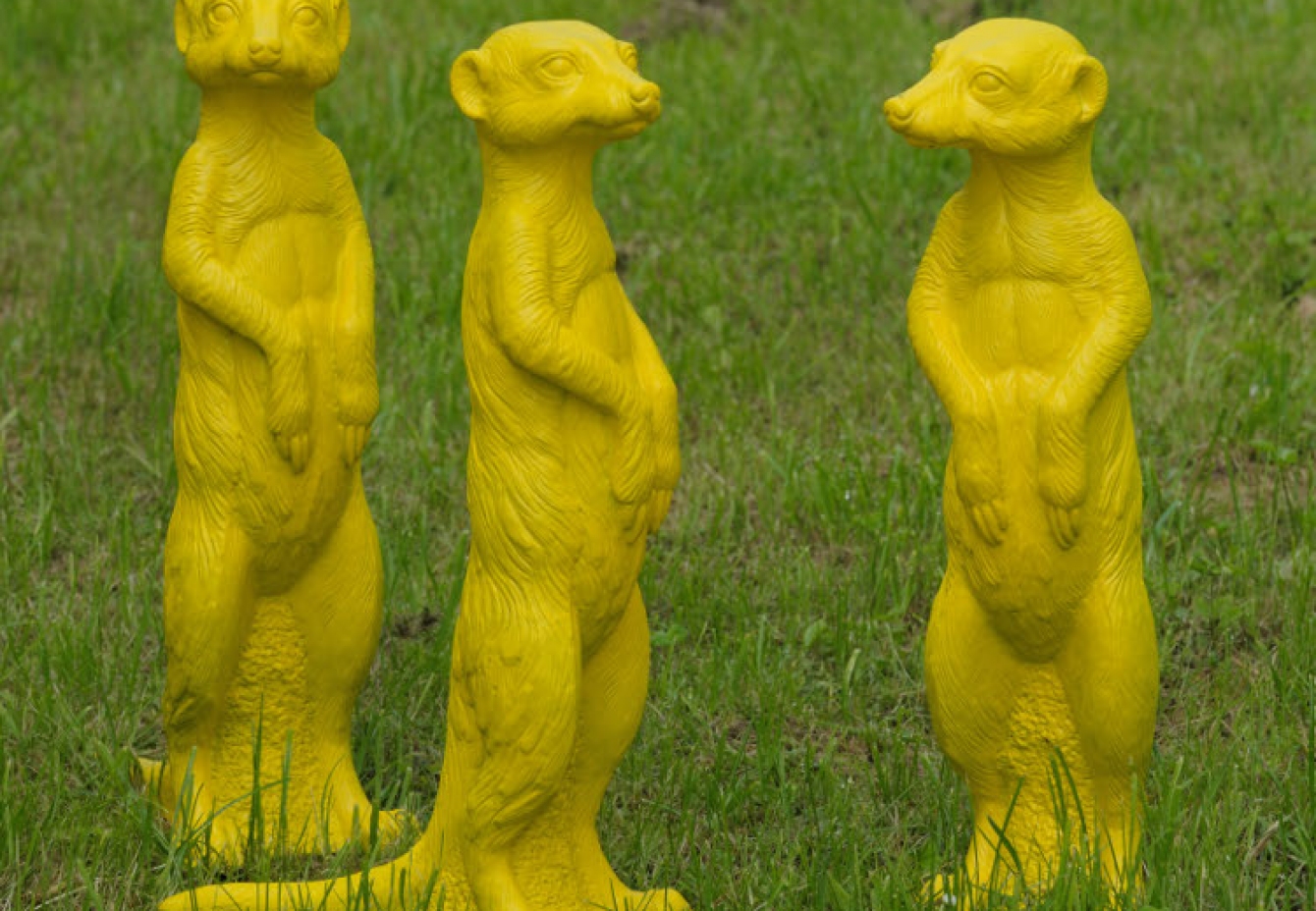 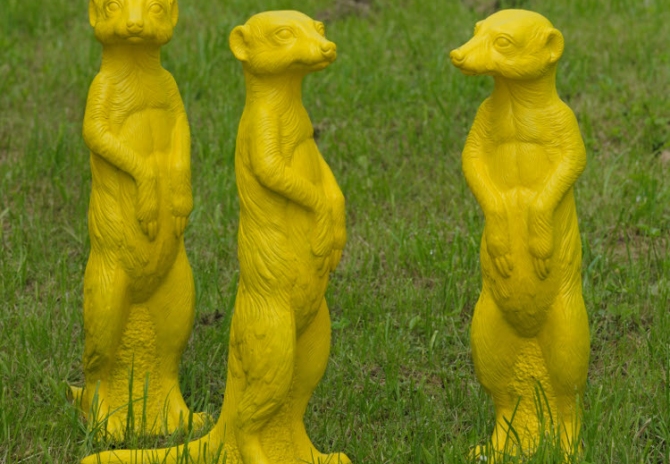 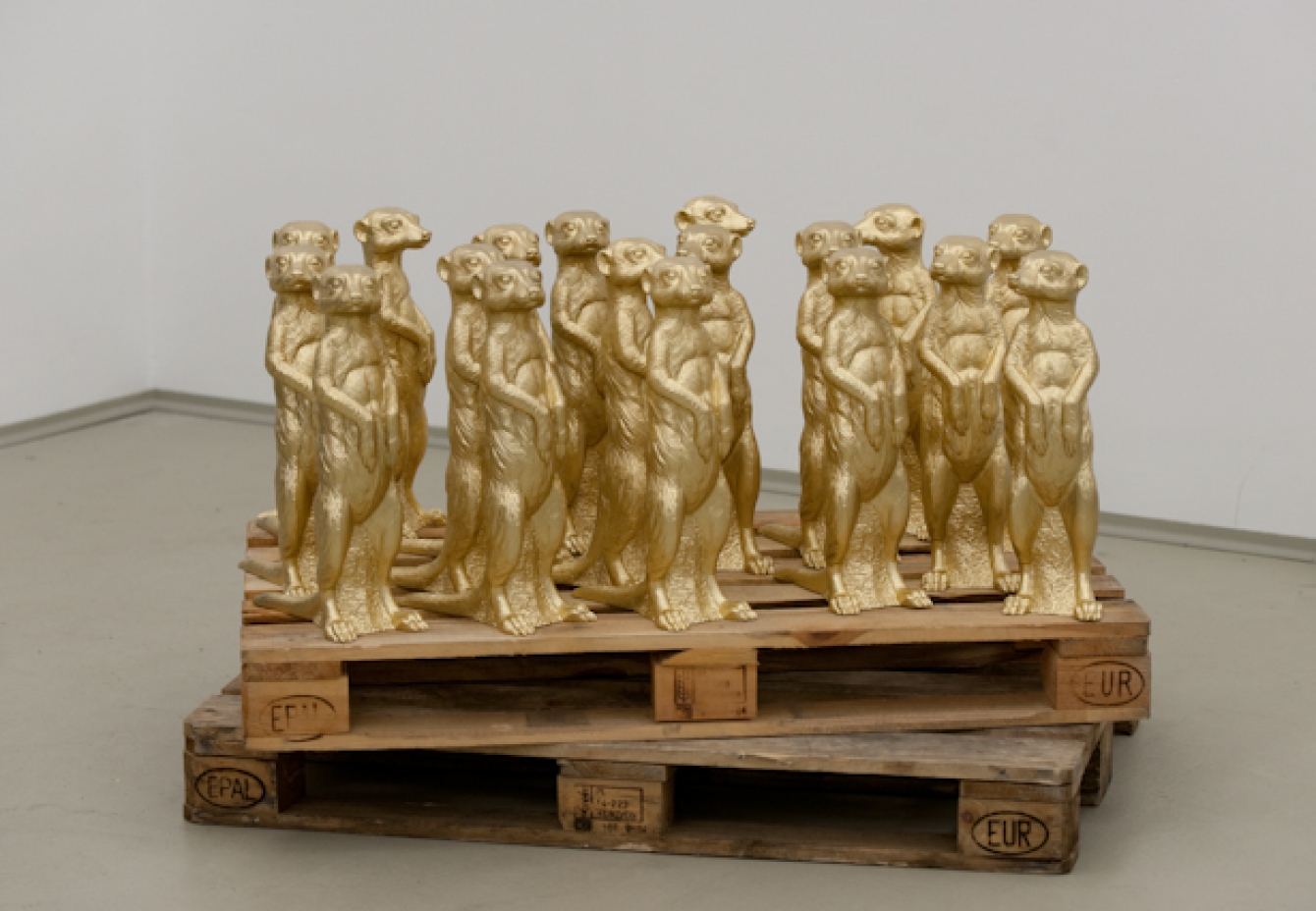 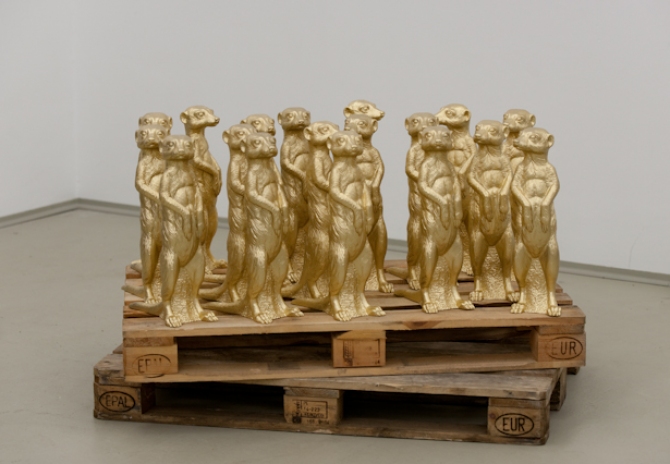 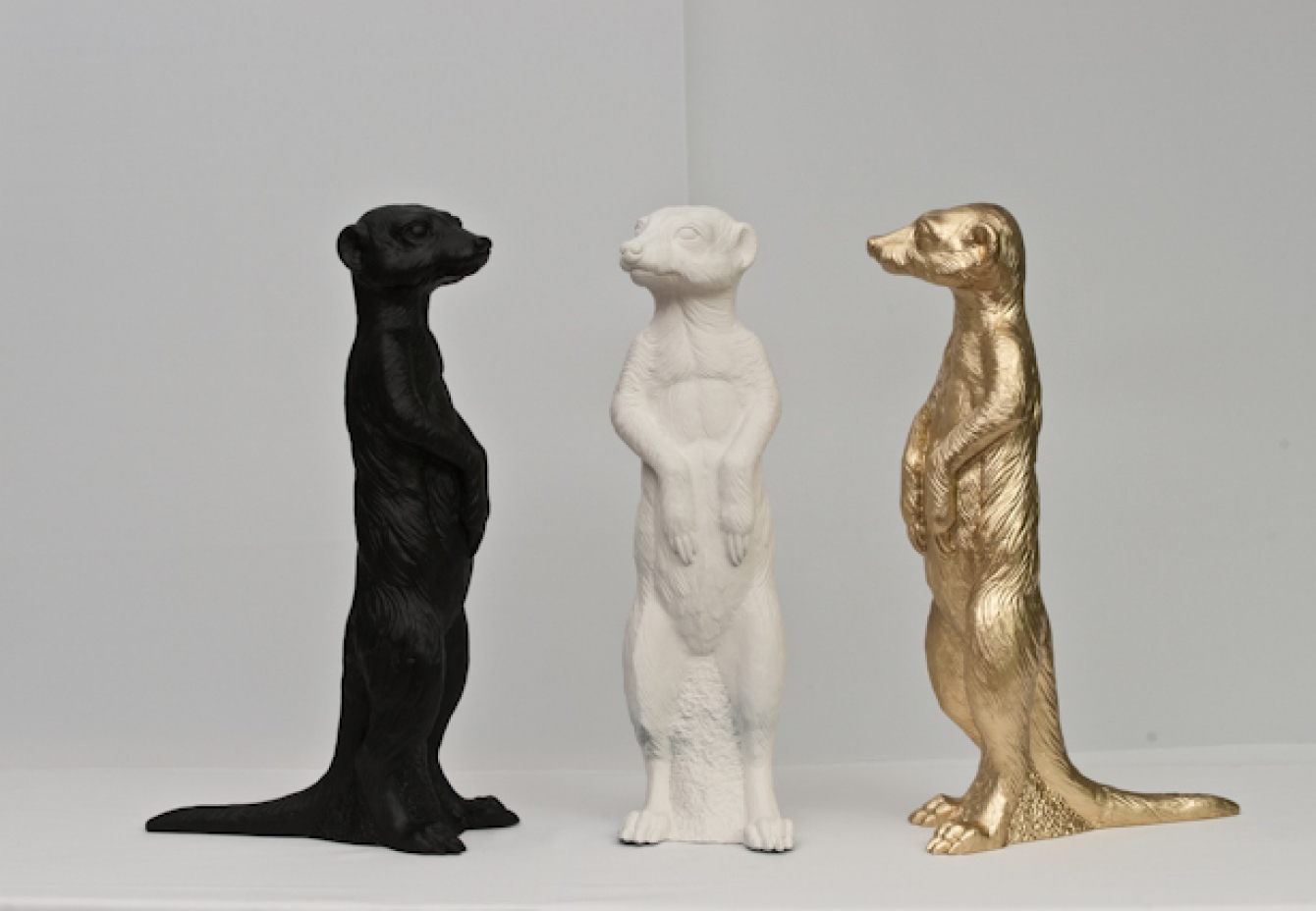 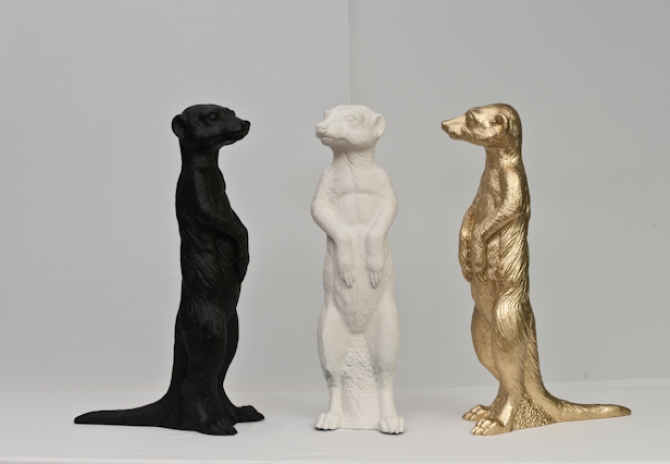